Here is another one of those contentious posts.  Better pop some popcorn.

What is the point of prayer?  Surely, I’m going to come off sounding quite confrontational in this post, no matter what I say, but I’m going to do my best to engage prayer on its own standards (see, even there I wanted to put prayer in quotation marks, but I resisted the urge).

And don’t call me Shirley.

Why pray?  Let’s jump right in, shall we?  Obviously, the simple answer is, ‘Pray to get what you want.’  But, any good theologian will tell you, God isn’t a Genie (sadly), and praying certainly doesn’t have a 100% success rate.  You pray in order to beseech God, as a means of communicating your desires to him (rather, Him), but the answer is never guaranteed.  If you are requesting something of Him, you can expect one of 3 answers: Yes, No, Maybe.

See, God is essentially a parent, and you are a 9-year-old boy asking for a Radioshack remote control car for your birthday.  And just like your parents, God tends to be a bit coy with His response.  Sure, your sister may be dying of cancer, but God doesn’t just want to heal her.  I mean, where’s the fun in that?  You pray for 10 straight weeks, eight times a day, and after all that prayer, all that time on your knees, God finally answers you and… Your sister’s breast cancer goes into remission.  Hallelujah.

Except, 2 blocks down, Willy Graham’s mother also has cancer, and just like you, he believes that God will heal her if he prays, so he does, eight times a day for 10 weeks.  But his mother’s cancer doesn’t go into remission and she dies, painfully.

So, what does this mean?  Well, it sure would simplify things if we could just assume that Willy Graham was secretly a child molester and that’s why God didn’t answer his prayers.  But, in reality, Willy was a ‘decent’ Christian: church-going, tithing, virginal, the whole nine yards.  Squeaky clean.  Just like you.  I mean, certainly you are a perfect Christian.

Hm, I guess we eliminate the idea that God always answers the prayers of ‘good’ Christians.  I think anyone who was reasonable (e.g. not Fred Phelps) would admit that there are plenty of ‘decent’ Christians who have had their prayers gone unanswered, while plenty of douche bags (God’s term, not mine) get their way in life.  God-fearing, self-sacrificing people have terrible things happen to them all the time, regardless of their prayers (hence the classic philosophical question, “Why do bad things happen to good people?”).

So, not only does God capriciously answer prayers with Yes, No, or Maybe, but He doesn’t base His answer on the relative sanctity of the person praying.  When you pray, there is really no obvious precondition by which you can know if you’ll receive the answer you want.

So, apparently, prayer isn’t about getting what you want.  Sure, you may pray for something and then it’ll happen, but just as likely, you will pray for something and it will not happen.  If there was no God, this would be exactly what we would expect, a random occurrence of good and bad events across the spectrum of human existence.  On the other hand, if there was a personal God, a God that responded to our prayers, we would expect some sort of positive correlation between prayer and getting what you want, but that simply isn’t the case (notice that’s a Christian website admitting this fact; it’s quite the acrobatics they perform to try to suggest that the results prove their beliefs are true; it’s cute).

That gangsta rapper whose lyrics are all about fucking bitches and slinging drugs won a Grammy and thanked God for it, meanwhile, your sister has still got cancer.  Does that make sense?

In the Bible, you are encouraged to pray unceasingly, an idea that implies that prayer isn’t about kneeling down like a prostitute and saying “Our Father” (daddy issues come to mind).  I came to understand prayer (when I was a Christian, based on the verse in Thessalonians) not as simply saying, “Dear God, give me shit, Amen!”, but rather, like it was an open communication with God.  It’s a phone call.  It’s an e-mail.  It’s text messaging (man, do you think Mary sexted God?).  It isn’t about asking God for things, it’s about staying in constant communication with the creator of the universe, keeping open your mind (and your spirit) to the message God had for you.

In this way, prayer is less a verb and more an adjective.  You don’t pray, you are prayerful.  This explains why you don’t always get what you want (but if you try, sometimes, you get what you need).

Alright, so prayer isn’t rubbing a magic lamp.  It’s a chat with your BFF.

That doesn’t explain what prayer actually does. Why is it so important that people be allowed to pray?  I’ve seen plenty of talk of how the removal of prayer from public schools in America has led to all kinds of horrors in America, including 9-11, Columbine and the Twilight Saga.  This seems odd for many reasons.  For one, none of these so-called punishments have been very effective in getting prayer back in the public schools.  Back in the good ol’ days, when God was pissed with a city (or two), He destroyed it (and turned bitches into salt), and there was no question about His intent.  He got His way.

But these American tragedies have done nothing towards changing our public policy.  If God’s desire was for us to get into an unnecessary war in Iraq, then I suppose 9-11 served a purpose, but otherwise, God’s warnings to us have gone mostly unheeded.  Pretty unimpressive for the all-powerful creator of the universe.

Additionally, the case that has so many Christians riled up occurred in 1962.  Which means, it took 40 years for God to ‘punish’ us for the sin of removing prayer from public school (of course, any educated person will understand that the law merely establishes that the state cannot enforce prayer; it doesn’t actually ban individuals from praying in public schools, which is why every Christian I know has been allowed to attend See You At the Pole events without being handcuffed).  I guess it’s fitting that the God who seems to have a wishy-washy response to prayer in general would take nearly a half century to get around to punishing us for ‘banishing’ prayer.

Plus, the punishment is pretty indirect.  This isn’t a case of God punishing the son for the sins of the father.  This is more like punishing the neighbor of the sister of the best friend of the cousin of the guy who once sold a Snickers bar to the son of the father.  Apparently God isn’t all that picky, as long as someone gets it.  Eventually.

So, prayer has no actual effect on world events, but God is still pissed if kids don’t do it.  Keep in mind that the prayer of most kids sound something like this:  “Dear God, um, can you help me pass the spelling test and, um, can you make Danny trip in gym class because, um, he’s a big meany?  Amen.”  You would think, if prayer was really about staying in constant communication with God, it really wouldn’t matter if kids have a time set aside for prayer or not, because they are always praying (or should be).

It seems like it might be pretty hard for any Christian who enjoys a movie, television show or taking a massive Number 2 to truly be praying ‘without ceasing’.  Yet, ask any Christian, and they’ll tell you prayer is important.

Which brings me to back to the beginning:  Why Pray?  Other than maybe the Amish, there isn’t anybody who is in a constant state of communicating with God (and even the Amish probably aren’t praying that much during their morning barn raising).  At the same time, the world continues on.  There are those who pray fervently and have gotten their prayers fulfilled.  And there are those who were just as fervent but have gotten a big fat ‘No’.

If prayer served any purpose, you’d think it would cause God to jump in when terrible tragedies struck.  When the Holocaust happened, was no one praying for it to end, or was God just waiting for 6 million Jewish deaths before he said, ‘Yes’?  How about in Rwanda?  Or Sudan?  On which sides of the tragedy in Darfur is God sitting?  Has He not acted because not enough people are praying for its end (if so, that says something pretty terrible about the world religions), or is He not acting because the genocide there is His punishment for something (like 9-11 was for us)?

I am genuinely asking, what purpose does prayer serve?  I’m not asking ‘Why do bad things happen to good people?’  Religious philosophers have been giving pathetic answers to that question for centuries.  Even if I accept that God has a purpose for tragedies in the lives of believers and non-believers alike, that doesn’t explain how prayer fits into the whole scheme.

Some Christians will say, “God wants us to act, He wants us to be the tools of His will.”  And, okay, I accept that (I mean, as long as I’m hypothetically accepting the existence of any god).  But that still doesn’t explain why anyone ever prays.  It would seem God would actually be disappointed by a bunch of people sitting around praying instead of getting off their asses and actually physically doing some good in the world.

Some will say prayer brings them peace in troubled times, but secular meditation does the same thing.  Prayer is a common tenet of not just Christianity, but Islam, Judaism and most religions (assuming that prayer and ‘spiritual’ meditation are largely the same thing), yet it serves no purpose other than being a kind of psychological salve.

And if that’s all prayer really is, why not just meditate?  Or, better yet, why not get off your knees and address your problems head on?

I’m genuinely interested.  I’ve never heard a Christian say, “Prayer is a waste of time” (which would be refreshingly honest), so I’d love for someone to explain to me what prayer accomplishes.  (For me, this is my question for religion in general, but let’s keep it simple.)  I would be truly fascinated if someone could explain to me how a life of prayer differs from a life without prayer.

(If your only answer is a defiant, “Well, my life is better because I pray,” can you also provide evidence that nothing else in your life could possibly explain your good fortune.) 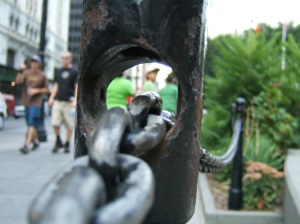