In my last update I left you with an exhilarating cliffhanger as I was about to head to Kansas for a family reunion.  Disaster was sure to strike.

And now the conclusion…

My flight to Kansas was uneventful, though early.  My sister, Deb, had arranged our flights so that she and her boyfriend, Alex; my brother Daniel and his son, Noah; and I would all arrive in Kansas City at the same time.  This did not go quite as we had hoped, as my brother missed his initial flight.  However, after a few hours delay, he and Noah arrived in Lawrence to meet us at the weekend rental house.

And what a house.  A former art professor from the university had bought two houses on Mass St (one of the main roads of Lawrence) and fixed one up specifically to rent out for short stays.  Fully stocked and immaculately prepared for our stay, it was the perfect situation for us.  Believe me, if you are staying in Lawrence (I don’t know why you would be, but go with me), take advantage of this arrangement.

The first night, we did dinner at my brother, Steve’s, house, as is our usual habit.  He’s the designated cook of the family and loves the opportunity to exhibit his skills, and we are always accommodating guinea pigs.  For dinner, he smoked ribs and chicken and we snacked on a cornucopia of appetizers (like bacon wrapped stuffed jalapeno poppers; suck it, arteries).  For the evening, we had drinks, joked, watched old home videos, ate a plethora of food and played with our two nephews, Jacob and Noah.  It all went off without a hitch.

Even my dear, old friend Shelly was able to show up.  Afterwards we went for drinks at the bars, one near my brother’s place and more downtown.  We threw a few back and still managed to get home without getting stuck in a snow bluff.

Now, if you’re keeping score at home you’ll realize nothing terrible has happened so far in the story.  What gives?  This is a Fonseca get-together.  Where are the explosions, the dead animals, the apocalyptic fights to the death?

The next day, my sister rented a pontoon boat so the whole family and assorted guests could ride out on Clinton Lake in the afternoon.  Though the rental people thought we were silly for going out on the Lake in late September, it turned out to be the perfect day for it:  Sunny and warm, but not hot, and devoid of all other crafts except for a few sailboats. 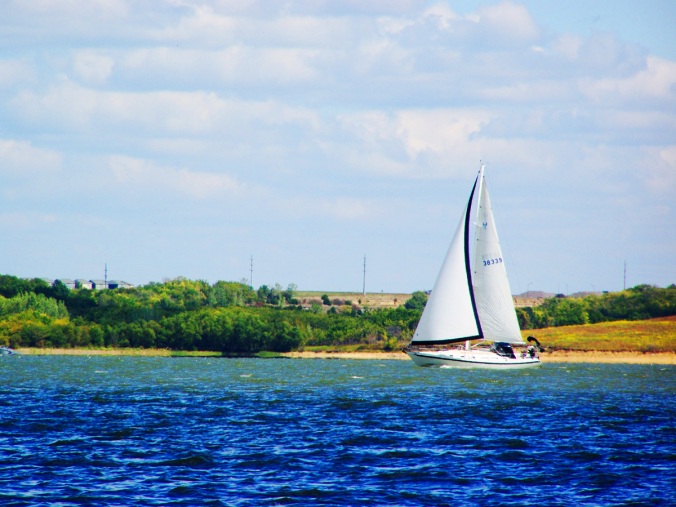 We had it good.  The young nephews had the time of their young lives.  Noah loved the worms and steering the boat: 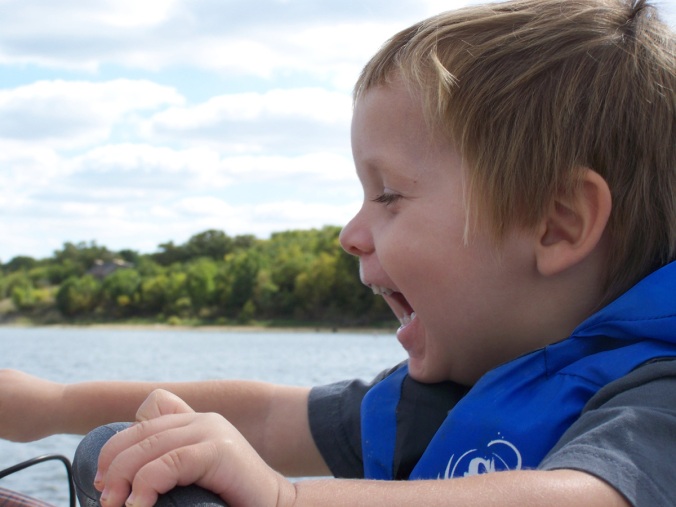 Jacob loved the fishing and dancing to the music:

We really couldn’t have asked for a better day on the lake.  And not once did we get stuck in a storm and trapped on an island.  Which is not something to be taken for granted with our family.

So, holy crap.  We’ve gotten to early evening on our second day in Lawrence, and everything has gone smooth.  It’s a Christmas miracle.  Except, you know, not Christmas.

As the family prepares to leave the lake, Steve and Alex decide they want to try fishing some more.  We’re in no rush so a few of us agree to stay behind while they attempt it.  Everything’s gone so smoothly so far, who knows, maybe someone will actually catch a fish.  We’re about to walk down to the edge of the lake when Steve suddenly realizes he doesn’t have his keys.  Neither does his wife, Sara.

They’re locked in the trunk of his car.

Alright, no biggie.  Daniel had Steve’s extra set of keys the previous night and had supposedly left them at Steve’s house.  I could drive my sister’s rental car to the house and grab them.  Except, of course, their front door was locked.  Still not a problem.  One of their windows should be open if I just knock off the screen.

I leave Deb, Alex, Steve, Sara and Jacob at the lake and drive to the house.  While I’m away, Jacob catches two fish.  Isn’t that nice?

At the house, I find the aforementioned window and set to dislodging the screen.  Inside, my brother’s cat stared up at me through the window.  As I worked on the screen, the cat pawed at it.  I tried shooing it away but it just hung out beneath the window ledge.  Now, my brother, Fonz, had already warned me that this cat was a little nuts so I was on guard.  It hadn’t bothered me the night before and, in fact, I had watched the two nephews play with it, so I figured, how bad could it really be?

Finally, I managed to loosen the screen and open the window.

And out flew the cat, claws a-swinging.  That little devil cat snagged me with its daggers and I jumped back.  It landed on the cement patio facing me, hunched for attack, hissing like a sonuvabitch.

Having felt its claws, I didn’t relish that sensation again.  I knew I had to dive through the window and realized I’d be pretty susceptible to attack while doing it, so I looked for a way to subdue the bastard.  My initial thought was to find another way in, but there was nothing immediately obvious.  Then, with Satan hissing at me, I considered trying to trap it underneath something, but other than throwing it in my brother’s gigantic smoker, the only choice available was a large ceramic flower pot.  I knew if I tried to drop it on the cat, I’d probably end up killing it.

I should have done it.

There were probably other options available to me, but I assumed it would be easiest to simply lure it away from the window and then book it inside.  I tried taunting the cat with a stick until it had moved away from the window.  Then I circled around the fence so that it was standing on the far end of the patio.  With about twelve feet between the cat and the house, I inched towards the window.  The cat watched me, but it wasn’t moving.  I was at the window.  I dove for it.

As I did, I heard a demonic whistle through the air.  Claws stabbed through my jeans into my legs.  I kicked and my attacker bounded onto my back and bit me on my shoulder.  It then went for my arm.  I wanted to fight back but I was upside down, my arms holding me up, my legs stuck up against the glass.  As its claws and teeth ripped into my flesh and its hissing shook my nerves, I flailed until I fell out of the window.  I could hear the glass breaking but I didn’t care.  My focus was on getting to my feet and breaking free.  Once up, the cat went for my leg again.  I kicked it away and it struck the wall, its head hitting with a thump.

The feral beast brushed off the hit and came back at me.  I bolted for the kitchen.  It held the line in the living room, watching me, waiting for my next move.  What could I do?  I fled into the garage.  It was here that I realized that the garage door wasn’t locked and I could have slipped into the house that way.  Information I was in no mood to appreciate.

As I hobbled to the car, I managed to send my sister these texts:

The cat… im gushing blood, not a joke

You think I’m exaggerating for effect?

Those were just the most concentrated cuts and bites.  My left arm is covered from fingers to armpit.  I have a cut under my chest, and I don’t even know how the thing got me there.  This Nazi cat must have claws on its tail.

I composed myself and drove back to the lake still bleeding, blood on my shirt, jeans and shoes.

And yes, the title of this post was a horrible, horrible pun.  You should have to suffer, too.

We did more shit between the cat attack and my flight out the next day, but to be honest, it all seems relatively mundane.  All of us got home safely, pretty much all in one piece.

If you’re keeping a tally: No fights.  No broken down vehicles.  And nobody’s cat died.  Yet.

So, I guess that makes this trip a success.  But the next time we all get together, the only animals allowed are going to be cooked. 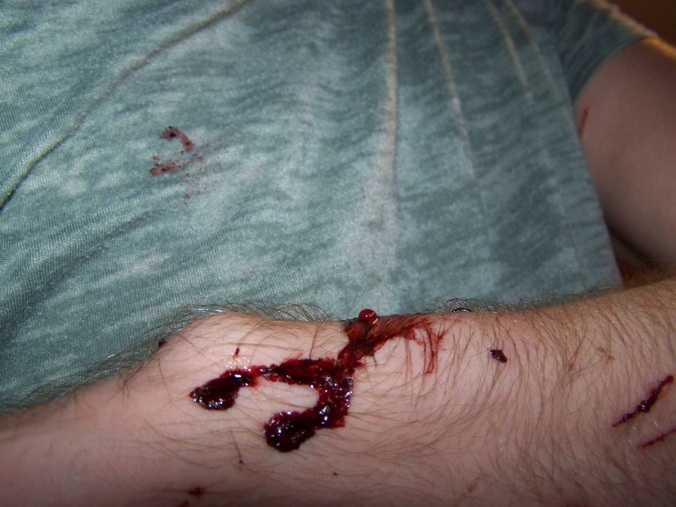