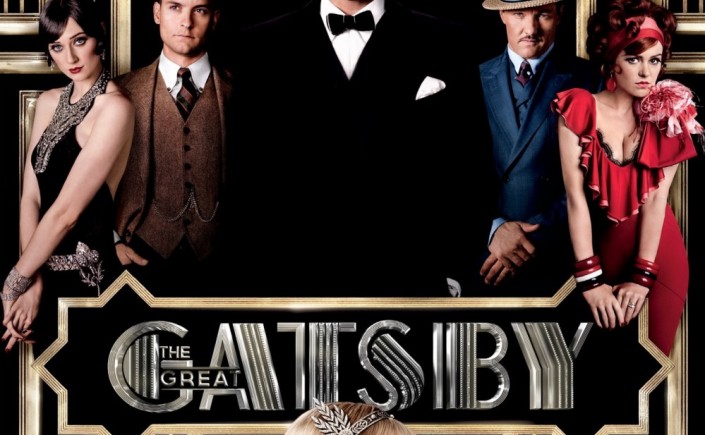 “So we beat on, boats against the current, borne back ceaselessly into the past.” 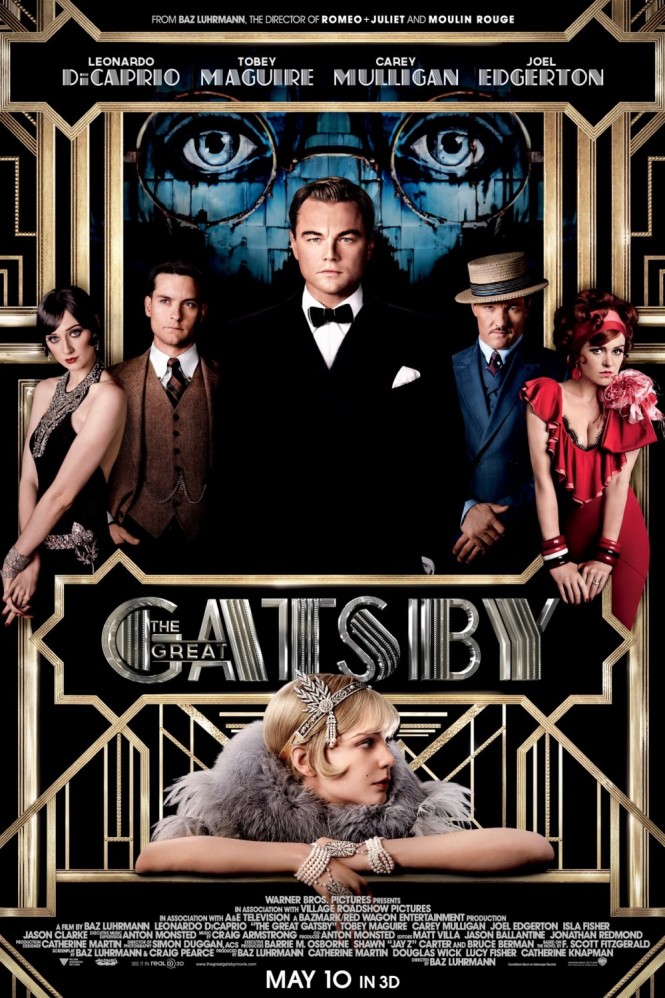 On May 10th, Baz Luhrmann’s adaptation of F. Scott Fitzgerald’s The Great Gatsby (in 3D) will release in theaters.

It promises to be many things, though perhaps a spectacle above all else. Every one of the trailers has put the emphasis on the visual and stylistic beauty of the film, which is no surprise coming from the director of William Shakespeare’s Romeo + Juliet, Moulin Rouge and Strictly Ballroom. Each of those films has their critics and champions, but no one would ever claim that Luhrmann fails in his visuals. The most common critique of his films is that he is all flash, no depth.

Many of the naysayers who are already sharpening their axes in order to chop down Luhrmann’s version of Gatsby are starting from there: They say the trailers are clearly showing a movie that’s all glitz and glamour, ironically missing Fitzgerald’s criticism of the dangerously shallow excess of the 1920s and, particularly, the moneyed class. How can this film be any good if it doesn’t get the fundamental message of the book?

Well, let me blow your minds for a second and argue that The Great Gatsby‘s defining theme is not the fatal excess of the rich. Now, before you wannabe English Lit professors have an aneurysm, let me say that, yes, that is a message in the book. It’s one of the messages, but it is not the central one.

Far too often, with our vantage point of history, we tend to adopt an interpretation of art that the artist never intended. Knowing that the Crash of 1929 was just around the corner (well, 7 years around the corner from the setting of the book), it’s easy for us, in hindsight, to read the book as a prophecy of the fleeting nature of wealth. However, Fitzgerald wrote the book between 1923 and 1924 and published it in 1925, well before the Great Depression. Because the novel, and Fitzgerald’s own personal arc of history, mirrors the boom and bust of the 20s/30s, it feels all too natural to view the book through that lens, but it’s an optical illusion.

So, if wealth’s fragility is not the defining theme of the novel, what is?

Our inability to escape the past. Throughout the novel, references to time come up again and again. In “The Authorized Text” edition (if you own a copy, odds are good this is the one you have), Matthew J. Bruccoli explains that in the novel, Fitzgerald uses “some 450 time-words, including 87 appearances of time.“¹ Every single one of the characters in the book is trying to either re-invent themselves or escape their past in some form. Gatsby is obvious, but you also have Tom and Daisy who have run from Chicago after a car crash shed light on one of Tom’s many affairs, and then there’s Jordan Baker, the golfer who was accused of cheating but managed to weasel her way out of it. Even Nick, the narrator, is trying to escape his life back home, reinventing himself as a bonds dealer in the mythical East.

(Minor characters are just as trapped: When Wilson finally gets up his nerve to force his wife Myrtle to leave New York, it leads to the climatic tragedy of the novel, fate maintaining a kind of stasis.)

There are other major themes in the book (the shallowness of excess being one of them), but Fitzgerald’s focus is most definitely on identity and its rigidity. The author was plagued by a desire to reinvent himself, and eventually did, transforming from an Irish Catholic in a Midwest middle class family into a member of the Protestant First Class. But just like his characters, that transformation would prove false and, ultimately, fatal.

What does this have to do with Luhrmann’s seemingly all-flash movie interpretation?

What the kneejerk critics don’t seem to get is that the flash is absolutely vital to the story. The dreadfully dull Robert Redford and Mia Farrow adaptation reveals what happens when you try to make a version of this book and strip it of all its youth and excitement. We’re talking about a book that pretty much defined the Jazz Age, the rebellious, youth-fed phenomenon that set the pattern for Rock n’ Roll, Disco, Punk, Rap, Grunge and every other youth movement since. As Fitzgerald famously said, he was writing “for the youth of his own generation.”

Yes, The Great Gatsby is a great work of American Literature and it deserves its place in the pantheon, but that doesn’t mean it exists in a museum. It’s a book of folly and youthful indulgence. Let us not forget, the narrator turns 30 during the events of the novel, and Gatsby is only a little older. The author was 28 when it was published. 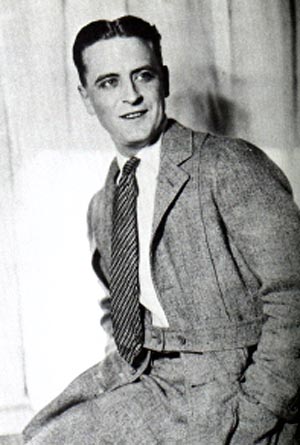 Okay, fine, maybe the movie will be good, but why should I see it this weekend?

I’m so glad you asked.

Have you read this? Hollywood will always look for the easiest, cheapest and fastest way to churn out a sure-fire hit (or, if it’s cheap enough, a sure-fire meh). I’m very happy that The Avengers was the huge success that it was, because while it was a summertime popcorn flick, it was well-acted, well-written, and, most importantly, well-directed. I’d rather it was Joss Whedon ruling the summer movie roost than Michael Bay.

Still, the success of summer tent-pole movies is a given, and has been since Jaws. The zeitgeist when it comes to summer movies won’t change all that much, give or take a smart Inception-type blockbuster. Some years the superhero/giant robot/alien attack movies will be good, some years they won’t. That’s just the way the summer works.

Hollywood really only pays attention when a true anomaly breaks through. What could be more anomalous than a hyper-stylized (3D even) period piece based on a classic novel that dispenses with notions of redemptive, everlasting love? A movie like that becoming a huge success throws a wrench in the system. Computer programs can’t predict that sort of thing.

Now, I’m not naive. I realize that if Gatsby is a huge success, it won’t be because of it’s dark themes or classical literature pedigree. It’ll be because of it’s flashy trailers and soundtrack featuring Jay-z and Beyonce and Fergie. Well, good! I can’t think of anything more fitting than slipping a work of literature into the mass consciousness via the Trojan Horse of flash, spectacle and Pop music.

I don’t know about you, but I sure like the idea of a movie producer calling in his lackey and saying, “How can we get in on this great literature trend?”

The only way, though, that such a bizarre reality can come to be is if The Great Gatsby is an out-the-gate success. I mean, a huge success. Again, I’m not naive enough to believe that this film will open to Iron Man 3 numbers, but it doesn’t have to. If Gatsby breaks the $50 million mark in its opening weekend (a feat that wouldn’t even put it in the top 100 of all-time opening weekend records), that would be spectacular (it’s projected to hit in the mid to high $30 mils) and also a huge flag for studio execs.

“You mean, we can make character- and story-based movies that actually sell? Who knew?”

Look, I know there are some people who have already decided this movie is going to suck. Maybe you hated the previews, or you’ve hated everything Luhrmann’s ever done, or you just hate anything that’s popular. Well, go see the movie this weekend anyway. I mean, if you want to be able to intelligently criticize the thing, you’ll have to see it, eventually. Might as well get it over with as soon as possible so you don’t sound like a pretentious hipster-doofus for the next few weeks. And then you can go back to listening to your vinyl.

But even if the movie ends up disappointing, I’d rather Hollywood try its hand at interesting, experimental adaptations of intelligent source material than yet another movie about a toy. So I’ll be there at the midnight showing Friday morning.

I hope you’ll join me. 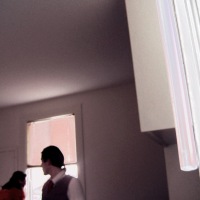 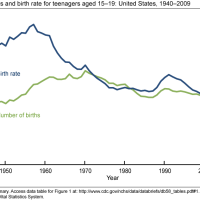 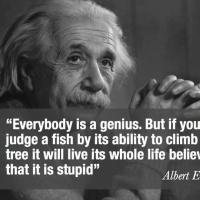