One of the great pleasures in life is going to a movie theater alone for some sparsely attended weekday matinee. Yes, it is nice to cuddle with a date at a movie or see a blockbuster with friends on opening night, but a great film experience is by its very nature solitary. If the artists have done their job right, it should always feel like you’re an audience of one.

That’s the special power of seeing a movie in an actual theater. The darkness, the cavernous space, the all encompassing surround sound transport you into the film. At least, that’s how it should be.

In reality, couples natter at each other, idiots check their phones, old people ask their companions what just happened and someone is constantly scrapping their fingernails on the bottom of a carton of popcorn. It’s hard to get lost in the experience.

Some movies are better with a crowd. A hilarious comedy or an Avengers-style action romp or a truly terrifying frightfest are improved by the collective laughter and unexpected jumps of an engaged audience.

Many other movies, though, are best seen alone. (Here’s where I admit I once stopped dating a girl largely because she talked during movies.) 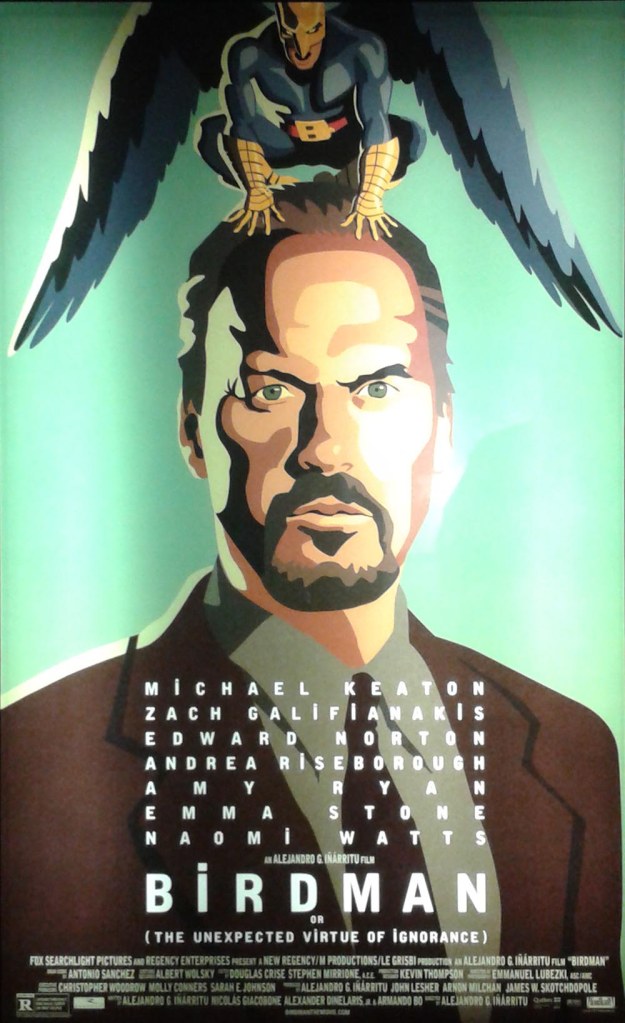 This week, I finally got around to seeing Birdman, this year’s Best Picture Oscar Winner, and I was pleased to find a mostly empty East Village Theater when I arrived. All the easier for surreptitiously pouring my flask of whiskey into my half-filled cup of coke.

A group of four Japanese girls came in shortly before the movie began and I was worried that they might be Chatty Cathys but they were graciously silent throughout.

Birdman is bit of a paradox in that it’s a deeply cerebral and artistic film that rewards close viewing, but also a wickedly funny and mesmerizing flick that manages to borrow much of the visual flare from the superhero movies it’s satirizing. I’m happy to have seen the movie essentially by myself so as to not have the intricate details overshadowed by laughter or a rowdy house, but at the same time there were so many impressive scenes – both in terms of acting and directing (I think Michael Keaton should have won Best Actor, but whatever) – that watching the movie with a packed house very well could have heightened the thrills and emotions.

Regardless, I thought Birdman was a fantastic movie. It wasn’t my favorite film of 2014, but it’s certainly one that I will be recommending enthusiastically.

My favorite film of the last year was another movie that I saw in a mostly empty Manhattan theater: Whiplash. I have been recommending this staggering film to almost everyone I’ve met ever since I saw it and I was rooting mightily for J.K. Simmons to win the Best Supporting Actor Oscar (he did!). I’ve never seen the exhilarating thrill of live music captured so perfectly on film, even in concert documentaries.

There is no question that this is a film of powerhouse performances with Simmons and Miles Teller filling each and every scene with pathos and sheer emotional rawness. For the first hour and 20 minutes or so of screen time, this is one of those ‘see it in an empty theater’ type films. It’s a powerful character piece that explores the depths of artistic obsession both in a student and a teacher.

Without getting too much into the details, I will say that the last 20 minutes is absolutely a ‘see it with a crowd’ type film. It’s a sustained climax in every sense of that word. Seriously, after the nearly 80 minutes of punishing musical instruction, the final performance is basically the equivalent of a cinematic orgasm.

That’s the singular power of film. It can speak to you as an individual while also uniting you with an audience for one glorious, shared trip.

My New York on Film

It’s fitting that both Whiplash and Birdman were set in New York City (come to think of it, my other favorite movie of the year, Obvious Child, was also set in NYC). It was reading about New York City in novels (and comic books) that first made me want to be here, but it was in movies where I found my first taste of what that life could be like.

Few cities in the world can claim as vast a cinematic language as the 5 Burroughs (perhaps only Paris matches New York for pure visual fantasy). Whether in romantic comedies, hard-boiled noir, action/adventure, crime drama or any other genre, there’s always that cliché: The city is a character, too. And no city has a more schizophrenic range of characters than New York.

Of course, I realize that most movie representations of New York are about as realistic as Friends, but that’s beside the point. I’ve never looked to movies for their documentary depictions of life. Even as a kid, I was simply reaching for cathartic release, an escape from small town Kansas and insular Christianity. A part of me hoped New York life could be as glamorous as it was onscreen, but what really drew me in was simply the size, the gargantuan storehouse of possibilities

Now I’m in New York and, no, to answer so many people’s question: It isn’t everything I imagined it could be. Because my imagined New York City is a movie set, a fantasy. And that’s okay. Reality has never matched up with my imagination. Every city I’ve lived in has failed to live up to the imagined version I held before I moved there.

And, yet, in a truer sense, every city has surpassed my imagination because any mental picture will always be hopelessly limited in comparison to the real thing.

My time in New York City is only just beginning. It has included concerts in Central Park and the Barclay Center, drinking on a rooftop with the Manhattan skyline in the background, late night subway rides with passed out drunks, bookstores and coffee houses and pizza joints and even a short but intoxicating liaison with a beautiful and talented French artist. And I haven’t even been here 6 months yet.

I don’t know how much longer I’ll be here before the call of the road takes me away, but sitting in that movie theater this week and seeing New York City on screen again, I was reminded why I always wanted to be here in the first place, why I had picked this city to be my 10th and final stop.

So, no, my time in New York City hasn’t been filled with non-stop thrills and raging parties. I haven’t had the definitive New York City experience yet, nor will I ever. But I’m having my own experience, and that’s enough. It’s my movie to make how I see fit.

Only time will tell if I’m making a crowd pleaser or the kind of film best seen on a quiet Wednesday afternoon in an empty theater.

7 thoughts on “A Movie in New York City”