Yesterday, my online course with the International TEFL Academy officially began. This is the first step in my long term plan to live and work abroad indefinitely. Over the next ten weeks, I will be reading lessons, taking quizzes, and completing assignments, the first time I’ve had to do any of this since I graduated college back in 2005. Never too late to try a new path, right?

I don’t know what type of teacher I’ll be; it’s never been something I seriously considered. Not that I’ve ever given serious consideration to any sort of career – other than writing, of course. One of the major forces behind 10 Cities/10 Years was my aversion to chaining myself into a job and settling for a traditional career plan. Eleven years later, can’t say I’ve changed much in that regard.

It’s why teaching English as a second language interests me, and why I’m willing to put down a sizeable investment for this certification. I’m learning a skill, developing a marketable tool that can take me anywhere – anywhere. If it weren’t for the lousy weather, I’d spend a year in the South Pole teaching penguins the indicative mood.

The goal going forward is not to bind myself to yet another schedule. At 22, I needed the structure and form of 10 Cities/10 Years because I was a traveling rube. I had only ever lived in small town Kansas – other than a summer in Washington D.C. – before I moved to Charlotte. Having a rigid plan kept me on track and gave me a finish line to reach for so that I kept striving, especially when the bottom fell out, which it did often.

By the time I had reached the final few cities, though, 10 Cities/10 Years had become a career in its own right. It wasn’t like any career you’ve had, to be sure, but as I swung through many of the same touchstones each year, it grew just as confining and limiting as if I had saddled up to a desk and filled out TPS reports. It’s not something I want to lock myself into again.

All the same, I’ll be forever grateful for those experiences I had through the decade, and more importantly, the skills I gained. I ended the project an infinitely more adaptable person. Traveling was an abstract idea when I set off on my decade tour, but now it’s a fundamental part of who I am. 10 Cities/10 Years was the scaffolding upon which I built my life; now I can stand without it.

One of the most vital adaptations I gained throughout those 10 cities was the ability to compartmentalize time. Everything was temporary – everything is temporary – which was a good reminder to enjoy what I had while I had it. Even more important for my mental survival, though, was the knowledge that if I had landed myself in an untenable situation – a crappy job, a messy living arrangement – there was a finite amount of time with which I would have to put up with it. All things would pass.

The whole endeavor made me profoundly aware of how long and how short a year really is. We divide our lives into years, both in terms of the calendar and our birthdays, but they’re largely arbitrary distinctions, the difference from December of 2016 to January of 2017 being negligible at best. Unless some major life change occurred in a particular period of time, months blur together, and then years.

From my 20s to my early 30s, my memories and associations have distinct time and place markers. There’s no blurring together of Chicago and Nashville, or Seattle and New Orleans. Even when engaged in similar activities in each city, the different backdrops and new companions shaded each year in its own, unique hue. Considering my affinity for whiskey, it’s helpful to have the memory aids. 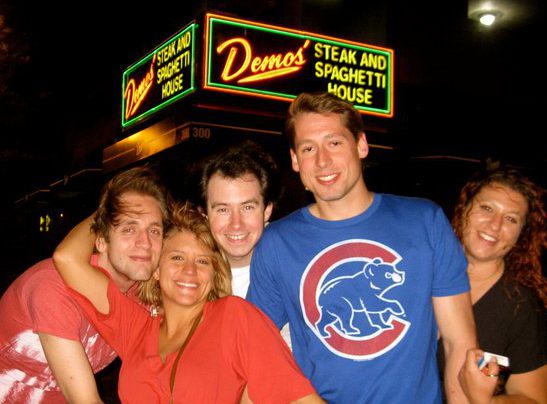 No idea who any of these people are.

If I’m not launching a second round of 10 Cities or, more ambitiously, 10 Countries in 10 Years, why keep the name? Because it’s who I am now. Everything that I went through and everything I overcame during that decade of itinerancy not only developed me personally, but shaped my understanding of what it is to live.

Over the years, as I’ve read travel blogs, I’ve felt deep jealousy towards those people who just hop from country to country – probably you have, too. Every blogger inevitably writes a post about “How I Do It” and once you get past most of the boilerplate “Just do it” aphorisms, the answer generally boils down to a mix of having lucrative employment (and/or a trust fund) and some form of company sponsorship. I always leave those posts feeling defeated, not inspired.

There’s a great deal of implicit privilege built into the whole travel blogging sphere. Even though I had neither reliable income or sponsorship, I still recognize that without my own privilege as a white male, 10 Cities/10 Years – an already arduous endeavor – would have been so much harder.

With that in mind, here are my goals for this website as I embark on my next chapter of travel:

The next eight months are going to rush by, especially once the summer arrives and plans start to firm up. I hope you’ll follow along with the process. Perhaps it will give you the inspiration and guidance to finally take that trip or make a needed career change.