Our last meal together was at Olive Garden. It could have been worse; it could’ve been Chik-Fil-A. In a couple hours, I was to board a bus headed for Philadelphia. My second of ten years was to take place there, but before that, I had to say goodbye to North Carolina. And Ashley.

We had only been dating for a month and a half – hadn’t even known each other for three – and from the beginning it had been established that I would leave, for reasons not entirely clear even to me. That didn’t keep us from soaking up every second together, never apart for more than a few hours. Our instant rapport was built on youthful zeal and fragility, a translucent love that began fading the moment we touched it.

For my last two days in Charlotte, Ashley and I were inseparable. She helped me pack up my apartment, drive my boxes to the post office, and unload the few pieces of secondhand furniture that I owned. With friends wanting to hang out and say their goodbyes, we savored our last, precious moments alone together. Our final night was spent in my spacious but now bare apartment. I laid my one blanket out on the carpet and Ashley slept in my arms.

She volunteered to drive me to the Greyhound bus station, and it was on the way that we stopped for committee-tested Italian cuisine.

A Greyhound bus station can be many things – cold, sticky, desolate, haunted – but one thing it can never be is romantic. No movie builds to the climax of a man swooping into the bus terminal just as his lover is about to give her ticket to the wheezing, septuagenarian driver. Greyhound stations are where stories end, not begin.

We stood in line together, me with a bulging suitcase, a green backpack, and a blue laundry bag stuffed with a cornucopia of my possessions, the draw string wrapped around the wrist of my right hand while my other held Ashley’s. We had arrived early because of her inherent punctuality and now we had a half hour to wait. She couldn’t wait.

My decision to move to Philadelphia, the decision to bind my fate to my10 Cities/10 Years project, had been made before I met Ashley. I suspect if she had come into my life just a couple months earlier, my life would have been very different. I couldn’t know it then, but the year ahead of me – indeed, the decade – would be tumultuous and exhilarating, crushing and beautiful; most of all, lonely.

Ashley was crying at my side, her stoic resolve dissolving with the clock’s merciless ticking. Up to the end, she refused to ask me to stay. Fearing she would, I had briefly turned bitter towards her in our last week together, but she held her tongue. She was young, but wise enough to know better. It didn’t mean she didn’t want me to stay; it didn’t mean I didn’t want to. I am a stubborn man, though. With her tears turning into sobs, I couldn’t give her the one thing that would have comforted her.

She left me then. It was too much to ask of her that she wait to watch me step up onto the bus. She fled back to her car and suddenly it was just me, facing my uncertain future alone. 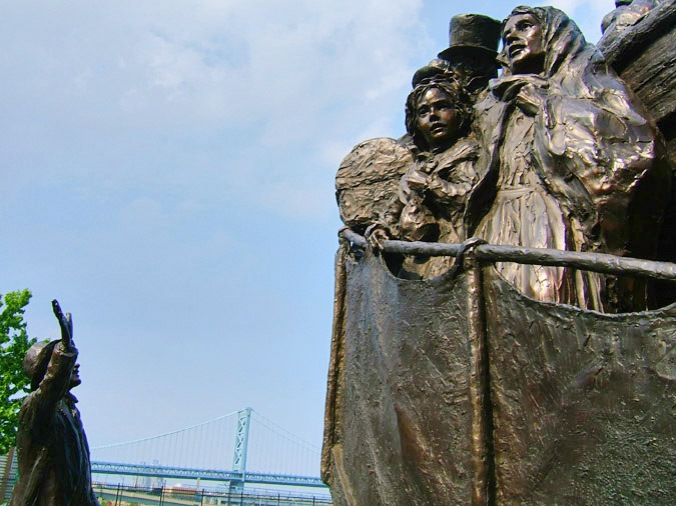 That’s not entirely true, actually. Standing in the line before me was a young boy, not quite 20 (granted, I was only 23). When Ashley left, he looked at me with a quizzical, unreadable expression, suggesting neither empathy nor embarrassment. His confused, blank eyes looked like he was seeing everything for the first time.

“I…” I was taken aback by his forwardness and also not entirely sure how to answer that question. “I’d rather not talk about it.”

“Okay.” I hoped that would end the conversation but he soldiered on. “Where are you headed?”

Since we’d soon be boarding the same bus, I saw no reason to not tell him: “Philadelphia.”

“Yeah? I’m going to Pennsylvania, too. My family lives in…” some city I don’t remember, a place that might as well have been Moscow for all I knew of Pennsylvania at that point. I flashed one of my patented half-smile/half-grimaces of acknowledgment, hoping that would suitably express my incuriosity. Typically, I might have engaged in innocuous chatter with a stranger – why not, I had nothing better to do for the next day – but Ashley’s absence was pulsing inside me, reinforcing how drastically uncertain I was of my choices.

“I’ve been in an asylum,” my glass-eyed companion offered without prompting.

Of course he had.

Feeling it prudent to give this boy the opportunity to talk about himself, I offered a simple, “Oh, yeah?”

He talked more, much more, but what he shared about himself I no longer remember. There was only one person on my mind. Was she still sitting outside, crying in her car? Or had she left immediately? Should I call her, attempt to say something comforting? Or would that just make things worse?

Eventually, the boy sensed my disinterest and went silent. Or, perhaps more likely, he had found it hard to maintain conversation with a pillar of salt.

When our bus was ready for departure, I gladly let him board first. The boy picked a seat near the front of the bus and I, avoiding eye contact (even as I felt his gaze on me), headed to the rear of the bus.

I’ve ridden Greyhound buses all over the country. From Kansas to Boston, from DC to Detroit, and countless stops in between. They aren’t pleasurable trips, but can be generally tolerable as long as you procure a few things: a seat to yourself, preferably not near a baby; a sizeable music library; and something to read that won’t give you a headache (magazines or paperback novels are good; Russian literature tends to strain the mind too much). If you’re so inclined, a few mini bottles of liquor can be of benefit, too.

Already drained of energy before we even pulled out of the station, it would turn out to be one of the most grueling bus trips of my life.

Our fully booked bus departed Charlotte midafternoon, due to arrive in Philadelphia in the morning, the following day. That trip is roughly 16 hours, a long haul, but hardly a marathon. The early going was nothing unusual. We made various stops as we progressed up the coast, out of North Carolina and up through Virginia.

When we made bathroom or food breaks, I found myself shadowed by the young, Pennsylvania-bound man. He attempted small talk, but after a few hours on the bus and still raw with emotions, I was in no mood for it. Though he eventually picked up on my unresponsiveness, he still hovered about me, always standing a few feet from me like he was afraid I and the bus would leave without him.

We were scheduled to arrive at the Richmond, Virginia bus station before midnight where I and most of my fellow bus riders were to catch a transfer at 12:30. Instead, inexplicably, traffic outside the city stopped to a standstill. By the time we got through and arrived at the station, it was coming on one in the morning and the bus to Philly was long gone.

The station was bustling with passengers. Apparently a number of delays had riders stuck in Richmond, and for those of us continuing north, we had to wait for a bus that was scheduled to depart at seven. We spread out in the terminal, hoping to find even a few feet of unclaimed floor space to sleep on (it was too much to hope for a free seat).

Even when I did manage to find the bare minimum of unoccupied space, I couldn’t sleep. I had my three bags with me, essentially every possession of any value stuffed into them, and didn’t feel safe falling asleep with so many restless, gray-eyed strangers around. For nearly six hours, I held loosely onto consciousness, but even when exhaustion began to win the battle, my growling stomach remained vigilant. I hadn’t eaten since Olive Garden, and my only options at that time of night were whatever the depleted vending machines had to offer.

Finally, sunlight peaked through the grimy windows and, with it, the promise of my Philly-bound bus. Unfortunately, when you’re sleep-deprived, hungry, and sore, the length of time between sunrise and genuine morning is interminable. As I waited for the departure announcement over the loudspeaker, I couldn’t sit still: I paced, I sat, I stood again; I carried all of my bags into the bathroom and then right back out.

To my great relief, my bus did arrive and in time, I was on the road again.

We pulled into downtown Philadelphia in early afternoon, a quarter of a day later than I was scheduled to have arrived. I still had to figure out how to get from Market Street to my apartment in West Philly. I was in a city I’d never been to before, weighed down with heavy bags (growing heavier with each passing minute), and completely unfamiliar with the public transportation system.

By the time I made it to my new home, I was too exhausted to process that my new apartment – nay, my new room – was barely large enough for a full-sized bed or that the bars on my window warned of a rougher neighborhood than I was accustomed to. I pulled out my one blanket, the one I had shared with Ashley, and laid it out on my hardwood floor. Then I passed out.

That wasn’t the last I saw of Ashley. In fact, she visited just over a month later, and we reconnected a few times over the years of my project. But what I left behind in Charlotte, what I abandoned with her, would never be recaptured again. Of course, it couldn’t: when we separated that first time, we were still in the midst of our initial infatuation. Looking back on those brief few weeks is like peering at an insect frozen in amber: It will remain forever pure.

I will always regret and not regret my decision to leave. I know if I had stayed, the relationship would have fizzled out in time – not because of Ashley, but because of me, because I was still so young and so far from who I would become with the years of travel and experiences. Knowing that to be true doesn’t make the sting of that first move any softer. It was something I had to go through. Loss is a fundamental part of traveling; people rarely tell you that.

Now, when I’m asked how I can move so much, when questioned how I stand to leave behind places after such brief stays, I can only think, “It will never be that hard again.”