It’s been a busy couple of months for me. In addition to my two day jobs, I’ve been working weekends as a server and teaching an ESL class one night a week, all while trying to write (rare), study Spanish (rarer), and have a social life (so rare, it’s still mooing).

Of all those demands on my time, I’m finding teaching the most rewarding. For about three hours every Monday night, I volunteer at El Centro de Educación de Trabajadores in Hell’s Kitchen, an organization that provides a variety of services to help immigrants and those whose first language isn’t English. They provide a good community service, a necessary service, and I’m glad I’ve had the opportunity to play a small part in it – as well as a little sad that next week will be the end of the quarter.

Partnered with a co-teacher, I help adult learners with first level English, teaching essential grammar and vocabulary. The students are at varying skill levels, and almost every week we’ve had a new student arrive, so there’s a lot of on-the-fly adaptation and rejiggering of lesson plans.

Every Monday morning, I leave my apartment at 8 to work a full 9-5 (5:30, really) and then immediately take the train a couple stops north to start teaching just after 6. The class ends at 9 and then I have roughly an hour ride home back to my apartment in Crown Heights. Then another six straight days of work. Sunday nights, I go to sleep exhausted just by the thought of the next day.

The strange thing – or not so strange, based on the admissions of my fellow volunteers – is that by the time class has started, I’m re-energized, excited to engage with the students, to hear about their weeks and learn more about them. They come from Venezuela, Brazil, Mexico, Iran, and other locales. Every week we talk about what life is like in their home countries, what they enjoy about New York, and what differences they experience in American culture. These are the conversations I live for.

When it’s my week to lead the lesson, there’s always a wee nervous stirring in my stomach, the weight of responsibility, a sense that there’s more at stake than whether a cheeseburger comes out at the right temperature. The glimmer of excitement in someone’s eye when they understand something that only minutes before they had not is the ultimate gratuity.

I’m sad that I won’t get a second chance to work with El Centro or my co-teachers. I hope to someday return to a similar type of program, either abroad or when (if) I return to the United States. Until then, I’m grateful for the opportunity. I don’t yet think of myself as a teacher, not really, but this was an important stop on that journey.

A Puzzle with No Solution

Ms. Drake turned out to be a surprisingly pivotal person in my life’s direction. I say surprising because, when she was my sixth grade teacher, I always found her teaching style to be a bit juvenile. She decorated her classroom with color paper cutouts that looked more appropriate for kindergarteners. We also had a midday break where she would read different books to us, some of them well below my reading level. I was mostly bored in her class.

Hell, I’m providing her the pseudonym of “Ms. Drake” not to protect her identity but because I genuinely don’t remember it. She only lasted at the school one year.

And yet, Ms. Drake, my Ms. Frizzle-esque sixth grade teacher absolutely changed the course of my life.

Up until sixth grade, when people asked me what I wanted to be when I grew up, I said a “mathematician.” I didn’t really have a concept of what that meant or how exactly doing math could manifest as a career. I just knew that I liked math problems, any math problems.

When I was still in single digits, I used to borrow my sister, Debra’s, algebra textbook and solve problems from her homework. I enjoyed all math, but algebra appealed to me the most because each problem was like a little puzzle, and boy, I loved puzzles. One summer, I took a school math book home with me to do homework so that I could advance the next year. By the time I was in sixth grade, I had leapt ahead in my math course to be in the same class as my older brother, Daniel. He loved that.

So, every day, usually coinciding with Ms. Drake’s reading period, I and another student, a much brighter boy than me named Juno, would leave our sixth grade classroom and go upstairs to join the upper level math class (our school was a private Christian institution that housed K-9 grades all in one yellow, metal barn-shaped building).

I took great pride in my math proficiency, and was more than a little bit of a shithead about it with my older siblings. But since I was a mortally shy and uneasy kid, it’s all I had; it was my entire identity, other than being the youngest boy from a messed up family – which I also took a weird kind of pride in.

Having that one thing to hang my hat on was very important because sixth grade was also the year puberty body slammed my groin like a Republican congressman and I discovered the most magnificent of life’s horrors: falling in love.

Her name was Laura. She wasn’t the first girl I’d had a crush on. That was Melanie in kindergarten, and there’d been others. But Laura was the first girl for whom seeing her enter the room made me feel like I was dying and being born at the same time. My crush on her is probably the reason I can’t remember Ms. Drake’s real name or most other things going on in my life from sixth grade through much of junior high: she outshone everything else.

As a chunky 11-year-old, I was not a smooth talker, and I was not cute, at least not to sixth grade girls. I was confident that Laura – and every other girl for that matter – was in love with my best friend at the time, Aaron, an athletic, naturally popular kid. That’s how I envisioned him; I’m sure his memory is far less charitable, as no one remembers their pubescent years fondly.

I went through that entire year in complete devastation, certain that I was invisible to Laura, though I know for sure that she actually did notice me: I was the jerk who made up some stupid, rude nickname for her. That’s right, I was the cliché, the boy who didn’t know how to talk to his crush so he insulted her instead. This was the beginning of a phase where, when I couldn’t think of anything funny or witty to say, I would just be mean. I expect that phase to end any day now.

There I was, in love with this incomparable beauty (there are few comparison points for an 11-year-old, Christian boy), and completely unable to break through the barrier between us. I’d met the unsolvable puzzle.

This is where Ms. Drake comes in.

In addition to the reading period, Ms. Drake would also set aside a portion of the day for us to write in our journals. We could write whatever we wanted, and at the end, those who wished to could read what they’d written aloud to the class. I’d never really done any personal writing before, never had a diary or anything, but I took to this activity with gusto.

During one of these writing periods, I created my first character: Jack String, a bumbling idiot of a private eye who always managed to solve his cases by pure dumb luck. I’m not sure where the character came from, but like most everything else about me at that age, I’m sure I stole it from something I watched on TV.

Feeling confident one day, I volunteered to read my Jack String story to the class. That’s when it happened, the most perfect, most beautiful, purest life-sustaining moment of my paltry existence: I read the silly story and the class laughed. Nay, Laura laughed. That was it. Fuck math, I was a writer.

Writing was powerful, it was world changing. It made me funny. Once Jack String came to life on the page, he became all I wanted to write about, all I wanted to do. Entering his world offered the briefest of respites from my uncertain real life. (Years later, when I unearthed the original Jack String pages, I was shocked to find that these “short stories” where barely two paragraphs long.)

As I grew older, Jack String transformed into a more dour detective until I abandoned the character altogether. Though I had loved reading Encyclopedia Brown and other detective stories, it turned out I was lousy at manufacturing meaningful mysteries of my own. My fiction grew less plot heavy as I developed as a writer, more character based. The humor also changed, from pratfalls to sardonic quips that are really only funny to me. It turns out, my sixth grade self knew how to entertain an audience better than current me.

Laura and I became “friends” throughout high school but it was always a walled off kind of relationship. At 18, when I read my poetry for the first time in front of an older, rowdy audience at the Jazzhaus, I invited her as my guest, hoping not too subtly that my exquisite words would wow the audience and capture her heart.

We were the only under-agers allowed in (my brother, Steve, ran the show) and we drank Cherry Cokes together at our separate table. When it was my turn to read, I sheepishly worked my way through the narrow passages between the swiveling chairs and up onto the spotlighted stage.

There I stood, a stick figure child with the blondest of long blond hair, standing before a drunken crowd of adults. I cleared my throat in preparation of reading truly terrible poetry, but before I could get any words out, a disembodied voice from the darkness hollered, “Hey, Hanson!” The crowd exploded into hoots and guffaws. I turned beet red, and then grew redder. Apparently I could still get a laugh as a writer.

Dripping sweat, I managed to mumble out my angsty couplets before leaving the stage to polite clapping. I sat through the rest of the show, every few minutes looking at Laura with a twitchy smile, but there was nothing to be done, nothing to salvage. I’m pretty sure that was the last time I saw Laura.

For all that humiliation, for all the social anxiety, I have Ms. Drake to thank. But, sincerely so. Getting up on that stage and being roundly embarrassed was a necessary experience. I went up almost every week for the next three years, and eventually grew more comfortable performing before an audience, even if the poetry didn’t improve. It was facing that fear that led the groundwork for other major leaps that I would make in my life, particularly 10 Cities/10 Years.

It’s a strange influence that a teacher can have on a student’s life (and a preposterous society that doesn’t revere and support its teachers). If you were to ask me which teachers I’ve learned the most from or who I had the most admiration for, Ms. Drake wouldn’t be the first to pop into my head, and yet, truly, no other teacher sparked such a fundamental and lasting passion in me.

It’s crazy to think, if not for Ms. Drake, I might be an engineer instead of a writer. 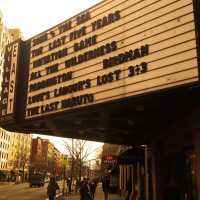