Eight years ago, yesterday, I launched this blog with a post entitled “Count the days.” At the time, I was already four years deep into my project, one month out from moving from San Francisco to Chicago, so I decided that it was about time I started documenting the journey. Well, sort of.

From the very beginning, my blog posts had a schizophrenic inconsistency, covering a whole litany of topics and themes (my second post, published the same day as my first, was a poem I’d written about two girls merged into one composite character). Truly, it was a blog in the most tedious, cliché sense of the word. Good thing it’s gotten so much better since then, right?

Last days are never as profound as they appear on TV. People don’t confess their love in airports or spend one final day doing all the things they always dreamed of doing but never did. Goodbye parties, of which I’ve had my fair share, have become increasingly subdued over the years, especially as the thought of waking up hungover before a flight has grown unappealing. I’d rather show up to the airport well rested.

Some years back, I began a tradition, one of many small affectations-turned-habits I’ve picked up over the years in an attempt to create a faint sense of constancy and purpose in my otherwise pointless life: On the night before I leave a city, I go to a bar by myself, a joint I’ve never been, usually in a neighborhood I hadn’t gotten around to exploring. I sit down, have a few drinks, maybe chat with someone, maybe not. Then, after an hour or so, I pay my bill and leave. No grand affair.

I could justify the tradition with some post factum literary explanation: it signifies how I came to the city alone and will leave alone; it reminds me that no matter how long I spend somewhere, there will always be somewhere I haven’t explored; it’s preparation for my reemergence into solitude.

The real explanation is so much simpler than all that: I’m tired. A lot of work goes into making a move, and a great deal of energy is expended in the gauntlet of goodbyes. I’m grateful for a chance to see people before I take off, but it takes a toll. Holing up someplace where no one knows me or cares if I sit in absolute silence is restful. It’s my Irish Goodbye to the whole city.

I will miss New York City, both a final city and a first. It has been my home for longer than all but my birthplace, and its inexorable glow has been my guiding light for as long as I’ve held dreams for the future. From the moment I set foot in Brooklyn, this city has tested and resisted me.

The very first time I found myself running late here, I had a quintessential New York experience: Without explanation, the train I was on shut down and held in the station. After waiting nearly ten minutes in confusion, a man came rushing past the car, not an MTA employee, just a fellow passenger, and bluntly informed the lot of us that there had been a shooting in the next station. A typical welcome, I suppose.

No wonder I love this town, I’ve always been a sucker for a lady who plays hard to get.

I don’t mean to imply life here is always a challenge. There are great pleasures to be had in this city, both cultural and personal. From a sunset rock concert in Central Park to a vibrant, surreal burlesque/musical/fashion show in an unmarked theater in Bushwick, the city has indulged my cravings for new. I’m a boring person in a city that expels boredom.

New York makes a lot of promises; it’s up to you to see them fulfilled.

When – if – I come back to the US, I don’t know to which city I’d return. New York is the obvious choice, but it is exorbitantly expensive and its capricious social circles will only be harder to pierce with more years on my back. Chicago? Fun and pretty, and friendlier than NYC, sure, but also just a smaller version. Seems like stepping back. Seattle still holds a part of my heart, but who knows if it would be the same nearly a decade on. Of course, there’s always Kans…. haha, nope. Couldn’t even finish the thought.

I’ve had many homes here in the States, but I wonder if they would still feel like my homes if I returned to them. For that matter, will the United States? Granted, there are still massive portions of the US I’ve never seen, so I could always find some new corner, maybe a secluded cabin in the mountains, a babbling brook and towering trees for neighbors.

I’m a man of fleeting desires, though, so all I can speak to is how I feel in this moment, and right now, my heart wants to see the world, to cross borders and time zones and watch sunsets from lost horizons; to not look back.

“I don’t know” is a phrase I’m using a lot lately. I have left behind the realm of long term goals for an open road. With each new endeavor I set out on, there are fewer signposts to provide me guidance. Potential calamity, a constant companion throughout my ten year project, remains reliably by my side, and we’re packing light. Everything else is up in the air.

Thirty-one. As I have done so many times before, I’m counting the days until my next departure, both overwhelmed by the long list of things I have yet to do (and would like to do), and filled with anxious excitement for the unknown. Thirty-one days is a lifetime; also, merely an instant.

2 thoughts on “Count the days” 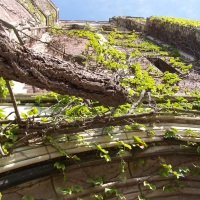