There have been difficulties. There always are. If you’ve read the account of 10 Cities/10 Years, you couldn’t have possibly come away believing that this is an easy way to live. It’s not just the financial and health concerns, the physical and mental toll, the loneliness and isolation, the unending self-doubts and recriminations… you know, actually, it is just those things. But that’s a lot of mierda.

Now, add to that list full immersion into a foreign country. Got your Xanax?

You may not know this, but the first major city I lived in was not Charlotte, NC. A year before 10×10 launched, in the summer between my junior and senior years, I moved to Washington D.C. for three months.

My college girlfriend – with whom I would move to North Carolina the next summer – had landed an internship with the D.C.-based Stars and Stripes newspaper. She attended Northwestern and I was enrolled at Kansas University, so we rarely saw each other during the school year. Against the better judgement of our parents, we decided to live together for the summer in our nation’s capital.

We found a studio apartment being rented out by a woman who was leaving the city for the summer (for India, if I recall correctly). It wasn’t easy making arrangements from two separate cities, but we managed it and locked down a place to live from June through August.

My semester ended in May, but NU’s quarter didn’t conclude until mid-June. With no reason to stick around Lawrence, I moved to D.C. on my own. For the first two weeks, I would be alone in a new city, my first experience of being a stranger.

It was an auspicious time to be in D.C.: On June 5th, four days after I arrived, former President of the United States, Ronald Reagan, passed away. (I had nothing to do with it.) A seven-day state funeral followed.

I had only been seven-years-old when Reagan left office, so I have no specific memories of life under his administration. For me, the Eighties are defined by Back to the Future and Family Ties. For all intents and purposes, my president was Michael J. Fox. Still is, frankly.

Depending on who you ask, Reagan’s legacy covers the spectrum from the Second Coming of Christ to a worse war criminal than Pol Pot. At the risk of being labeled a “Centrist,” I suspect it’s fair to say he falls somewhere in between those two poles. At the time of his death, I had next to no opinion of Ronald Reagan, so when I heard his funeral procession would be reaching the Washington National Cathedral – a mere 15-minute walk from my new hope – I thought, “Let’s ‘ave a look, aye.”

Some citizens waited for upwards of seven hours to catch a glimpse of the body in person, but I wasn’t that invested. I opted to stand on the side of the road with the rest of the plebeians to watch the procession of limos and police cars. There were celebrity newspersons and politicos popping in and out of view, a sort of morose red carpet affair.

By some ironic twist, I happened to take up a spot directly to the left of a small coffle of protestors. Now, in today’s political climate, that might seem unremarkable, but these discontents represented a rare contingent among those gathered. Stranger, still, the group of protestors were not voicing opposition to the former president’s policies.

Brandishing brightly colored signs, a handful of conservatively dressed women and children chanted messages echoing the sentiments of their poster boards: “God hates fags” and “America is doomed.” Flying out from their home base in Topeka, KS, the Westboro Baptist Church (sans patriarch, Fred Phelps) were protesting a man who many blame for worsening the AIDS epidemic and who few would call a friend to the LGBTQ community. Baffling.

As it turns out, Reagan, a former actor, had been friends (to some degree) with Rock Hudson, a famously gay Hollywood star who died of AIDS in 1985. Though Ronald and wife, Nancy, have been accused of refusing to help Hudson receive AIDS treatment – which you would think would put them in good standing with the WBC – the fact that Reagan never publicly disavowed the movie star was enough to earn the church’s ire. No one does purity tests like brain-rotted bigots.

As confounding as all of that is, for me it was more bizarre that I had relocated over 1000 miles (~1600 km) and somehow ended up in the aural radius of a hate group from just outside my hometown. That didn’t seem fair. I mentioned my incredulousness to the man standing next to me who had been engaging in some futile sparring with the WBC protestors.

“I can’t believe these people are here,” I said. “They protest everything. They show up every year for my high school’s graduations.”

One woman, looking to be the leader of the WBC troupe, overheard my comments.

“Oh, poor baby,” she mocked, “did we protest your graduation? Fag lover.”

As unexpected as it was to find myself in the presence of the WBC, it was a reminder that, though for me this was a humongous move, I was still in America, and state lines are not borders.

Maybe I wasn’t really all that far from home, but I felt like I was on the moon.

I’ve rarely discussed just how depressed and overwhelmed I felt during those two weeks. Back in Kansas, I’d been going through one of my lowest periods, stuck in limbo with no clear path forward; but at least I had friends to distract me. Sitting in an empty D.C. apartment, there was nothing to mute the roar of my unhappiness.

I’ve never been one to keep a day-to-day journal. Even this blog at its most active has hardly been about detailing my life in the moment. Yet, in D.C., alone and terrified that I had leapt into something way over my head, I pulled out a college notebook and began writing almost daily entries.

Those anguished scribbles detail a boy completely unsure of himself, depressed naturally, but also scared and angry and utterly directionless. I worried I wouldn’t find work; I had doubts about the sustainability of my relationship; and I was certain that I would fail as a writer. I poured all of those fears onto those college-ruled pages.

All these years later, it’s paradoxically comforting and discouraging how much I relate to that sentiment.

What I didn’t recognize at the time, what, in fact, I didn’t recognize until this past week, was that I was experiencing a form of culture shock. Generally, that term suggests the hardships of adapting to a different country where familiar touchstones are no longer accessible. Sure, D.C. was much bigger and more populated than my Kansas hometown, but it wasn’t all that dramatically different. I could still speak the language, for one.

And yet, reading back over these old entries (I’ve kept them all these years though they embarrass me terribly), it’s impossible not to note all the symptoms of culture shock: the loneliness, the anxiety, the shame at not knowing how to behave in new situations, and the certainty that deep down I didn’t belong.

Those are the same emotions and doubts I have faced with every move; though they lessened to some degree with each successive year, they never went away entirely.

Those same emotions and doubts have hit me intermittently ever since landing in Madrid. It’s been a long time since I experienced cultural shock this acute. To be honest, I kind of haughtily believed I was beyond that, that I was too well-traveled to succumb to it. But, here we are.

I’ve met a splendid array of Anglos here in Spain, many from the States, plenty of others from the UK and other locales. As with all moves, I’m sure many of them will slip out of my life sooner than later, but the hope is to cultivate a few friendships from the group.

I’ve been fortunate to find a smattering of expats with whom it’s been possible to have more intimate conversations. One recurring theme in those conversations is the feeling that it’s not possible to fully express the difficulties of adjusting to a new home, that for Facebook and Instagram friends back home, it’s easy to assume the bright images and smiling selfies tell the whole story. 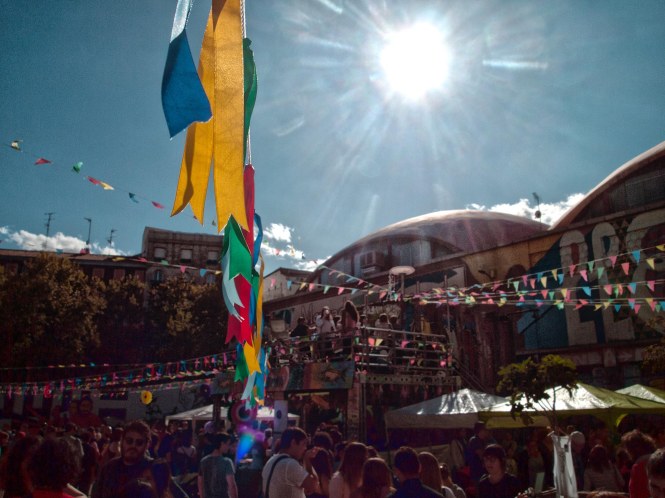 The answer to the question, “How is Madrid?” is a long and complicated one. It can be answered with some simple (but accurate) platitudes: It’s beautiful, it’s welcoming, it’s awash in delicious food and copious amounts of affordable alcohol.

While all of that is true whether you’re a tourist or a new transplant, for those of us in the latter camp, this new city life is also challenging, providing a mixture of housing complexities, occupational difficulties, and cultural barriers. Madrid is a superb vacation destination, but this isn’t vacation. This is life now.

To be sure, Madrid will be a wonderful experience, a transformative one. Just as D.C. was a move I needed to make before I could hope to take on 10×10, there are hurdles to bound over in this city that will make future opportunities possible. I’ll make it; it’s not always easy to believe that to be true.

By this time next week, my best travel companion, Emily – of Boston and cross-country road trip infamy – will have arrived, ready to take on the next year in Madrid with me. As with all things, we are on our separate journeys, but we will travel this road together for a time. That’s exciting and, yes, even comforting. Not every challenge has to be met alone.

It’s probably because of Emily’s looming arrival that I’m reminded of that summer in D.C., the way that I struck out alone and was forced to confront my anxieties – myself – on my own.

I have been here before; but, of course, I also haven’t. In the emptiness of each new home echoes the memories of past homes, until you’ve filled it with new furniture.

It’s strange to be this deep into my 30s and yet still feel a kinship with a 21-year-old version of myself who had seen and experienced so little. What did he know?

“All I want now is to be happy. Is that too much to ask?”

I’d make fun of your emo earnestness kid, but honestly, it’s not a bad question.

One thought on ““All I want now is to be happy”: Culture shock and echoes from the past”